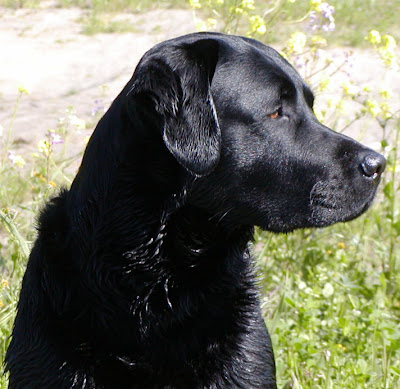 Thinking of dogs today... and how much I want one. Thinking of Booger... and all he represents. This dog... this beautiful, tall, deep black lab came to us slinking low... tail and body arched as though some invisible strings were pulling it up out of the ground... a reanimated shadow of the dog he could have been.
People had hurt him and as such, much fear filled the air between the erect hairs on the scruff of his neck and I would suspect (were I to understand him as another dog might) much hurt and anger as well. Of course I cannot know any of this for certain, but I do know that shadows of dogs and men are not made by regular meals, loving acceptance and a warm bed in the corner.
He came for the free meals he could pirate from our garage, but eventually stayed because my dad caught him and tied him to a calf-hutch with rope. Perhaps this much didn't surprise him... I doubt he expected to be consulted on the matter. But something did happen then that he did not expect. He was given regular meals, loving acceptance, and shelter.
I imagine that somewhere amid his cowering and snapping there was some form of doggy curse that would have offended if we had understood it, or at least some conversation that would have lost him our respect, but our ears, and consequently our hearts were closed to this judgment. We had no cause to think or gossip about what a dirty useless lizard this vagabond was... how long he had been thieving the food of respectable dogs, or how many pups he may have fathered illegitimately in his wanderings. We didn't look at him sideways, or try to keep children from speaking with him... because he's a dog... and dogs are known to do things like that. No surprises.
We don't want our kids to do these things: Stealing, vagabonding, sleeping around... but we have confidence that they can differentiate between how a dog acts and how they should act. Why? Who knows? Somehow though, this gap in communication and expectation practically resulted in a love toward this dog that was selfless, unconditional, blind, longsuffering, gritty and fibrous. It endured many months of struggle and rejection until the heart of the dog had been won over, transforming him into perhaps the most affectionate and loyal member of our odd family.
Love, unasked for, redeemed the heart of a lost, broken mutt... a phenomenon Christians proclaim to pursue and be specially privy to, but which most have secretly and practically given up hope in the existence of.
We can love this way. We have been told we cannot... but we can. When our expectations of others, and views of our own righteousness change... when our hearts are more honest with their own potentials/capacities, and more willing to waste love in the name of giving more of it, then we may understand Christ again... may see a love like he bore: a love that redeems mutts like us.
Posted by H. L. Burkholder at 5:31 AM

And oh, how how He longs for us to receive love that way from Him too!

YOU AMAZE ME. Thanks for that full course meal.